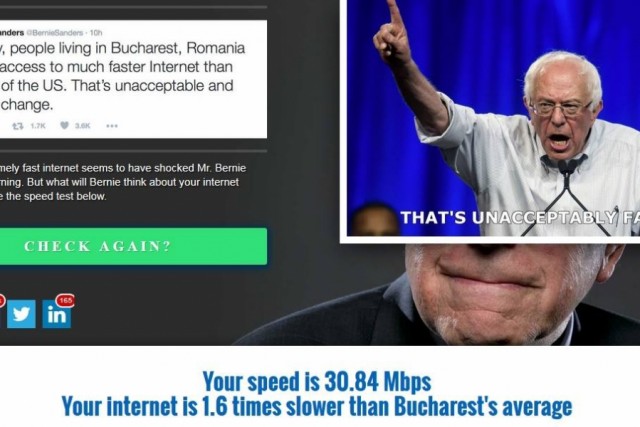 US Presidential candidate Bernie Sanders’ statement about the speed of internet in Bucharest determined many funny responses from Romanians.

While most posted funny messages in reply to Sanders’ tweet, some went even further and created the Bernie speed test.

“Romania’s extremely fast internet seems to have shocked Mr. Bernie Sanders this morning. But what will Bernie think about your internet connection? Take the speed test below,” is the call to action on the berniespeedtest.com website.

The app tests the internet speed of the users’ internet connections and compares it to the Bucharest average. Funny lines and pictures of Bernie Sanders accompany the results.

“Pinch me, I think I’m dreaming,” “Mother of all Internet connections,” “It’s the closest thing to a unicorn,” or “It’s unacceptably fast,” are some of the messages the users receive if they have very fast connections.

However, if the user’s connection is slow, he will get a consolation message: “Chill, it’s just like in the US.”

The app was launched by the creators of the Rage App, which boasts to be “the dislike button that you were promised; an easy way to connect and comment on the things that make your blood boil and your stomach churn.”