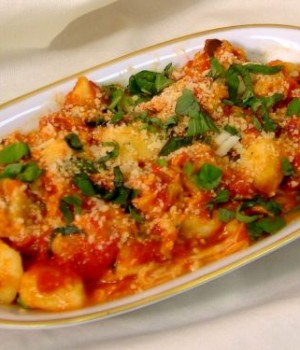 Goulash is essentially a Hungarian dish which gained popularity in the Ardeal region of Romania, eventually spreading around the entire country. There are many different recipes for goulash and every cook and every region will have their own additions or tricks. The essential componants are the meat (usually beef, but often pork), the onions, and the paprika. I was lucky enough to have some Hungarian paprika with is burnt clay colour and rich intensity. To really do the dish justice, try not to use that opened refill box of paprika that’s been hiding in the back of the spice cupboard for the last six years; go out and treat yourself to a new packet. If you’re interested in Romanian or Eastern European cuisine, then you’re going to need it!

Although this recipe is specifically for goulash with dumplings, it’s quite common to use potatoes instead. If you prefer you could make it without either, and serve it on rice or even with pasta. Whatever you do with it, it’s one of those dishes that sits in your stomach and warms you from within on a cold evening. I see most of the people who visit this blog are from Romania, so leave a comment and let everyone know how you make or eat your goulash.

Ingredients:
800g of meat (shoulder of pork or beef)
3 tablespoons of dripping or oil
4-6 cloves of garlic (according to taste)
2 medium onions
2 large red peppers
1 hot pepper (optional)
1 carrot
1 tin of chopped tomatoes (or 500g of peeled and chopped fresh tomatoes if you have access to good ones)
1 tablespoon of tomato puree
4 tablespoons of good Hungarian sweet paprika (do make sure it’s not the hot kind – a mistake could be fatal!)
1 teaspoon of freshly ground cumin
2 fresh (preferably) bay leaves, torn in half or in thirds
1 bunch of parsley, chopped for garnish
Salt and pepper to season

Method:
1. Cut the meat into cubes of about 1.5cm square.
2. Heat/melt the dripping or oil in thick-bottomed pan and start to brown off the cubes of meat.
3. While the meat is browning off, you can prepare the vegetables. Peel and finely chop or slice the garlic. Peel the onion and chop it finely. Peel the carrot and grate it coarsely. De-seed the pepper and cut it into large pieces (2cm square-ish). If you want some kick to your goulash, chop the hot pepper, removing the seeds if you want it a little less potent.
4. Once the meat has browned off and its juices have reduced, add the onion, garlic, carrot, and pepper and cook on a medium heat until the onion has turned translucent and the pepper has softened, about 5-6 minutes.
5. Add the sweet paprika and cumin, mix in well, add the tomato puree, mix again.
6. Add the chopped tomatoes and the bay leaves and stir well.
7. Pour in about a litre of beef stock, or water at a scrape.
8. Cover and leave on a low heat for about an hour. The goulash might appear slightly too watery at this point, but don’t worry, it’ll reduce slightly over the hour and the dumplings will also absorb some of the liquid.
9. While it’s simmering, you can prepare the dumpling mix. Beat the egg in a bowl with the water and then add the flour, one tablespoon at a time, until you get a consistency that just resembles a dough rather than a batter.
10. After the goulash has had an hour with the cover on, remove the cover and taking the dough in one hand, break of smallish chunks with the other hand and roll them between your fingers to get something like a flat rugby ball, about 1cm thick. Dampening your hands with water can help. Don’t worry if they come out a little irregularly shaped, this is pretty normal for this dish. Drop these into the goulash and leave, uncovered, on the lowest heat for about 15-20 minutes. If you think it has reduced too much, you can add a drop more water or stock.
11. Serve in bowls with a sprinkle of fresh parsley and season to taste. 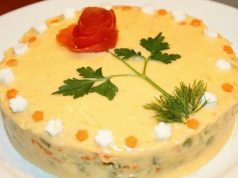 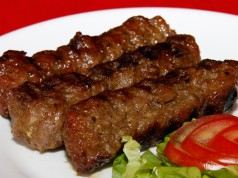 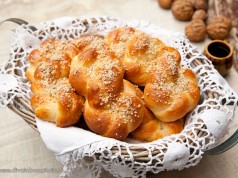